May 28, 2012  •  3 Comments
This post is about two short hikes in Amicalola Falls State Park and the interesting critters and objects seen along the way. One interesting object spotted in the woods is said to be a remnant of the moonshine business in the north Georgia mountains. Photos of that are at the end of the post. Amicalola Falls State Park is near the southern start of the Appalachian Trail in the state of Georgia, USA.
The AT (as hikers call it) is the 2,184 mile trail mostly through wilderness areas of the Appalachian Mountain System from Springer Mountain, Georgia to Mount Katahdin, Maine. Springer Mountain and the southern end of the AT is just outside the state park. The Wiki link below goes to a sketch of the Appalachians on a map of the United States and the second link shows the Appalachian Trail as a line along the mountains. At the bottom end of the trail line is Springer Mountain. Go 8.1 miles (13km) south and you will be at Amicalola Falls, the ending point of the two hikes combined in this post. 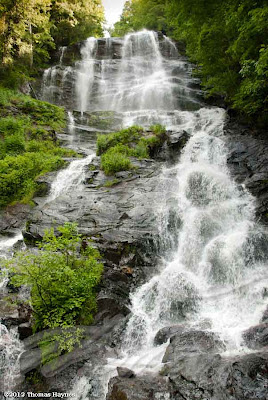 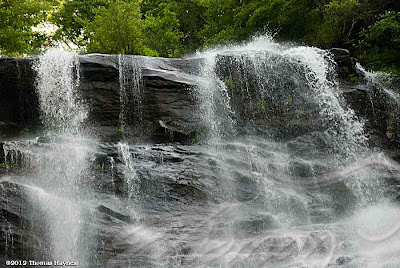 Top of waterfall as seen from vantage
point of the previous photograph
While every trail in these mountains has a particular character, much is seen in common where altitudes and general weather conditions are close to the same. Hikers moving northward into the Smoky Mountains of Tennessee and North Carolina would notice the higher altitudes bring different conditions and other forms of plant and animal life. While mostly deciduous trees such as Tulip Poplar fill the area around Amicalola Falls, the higher Smoky Mountains graduate into evergreens and mountain laurel shaded streams. Going to lower altitudes the evergreens are again replaced with hardwood deciduous trees.
This post does not venture north of Amicalola Falls but does provide a lot to see without going deeply into the woods. 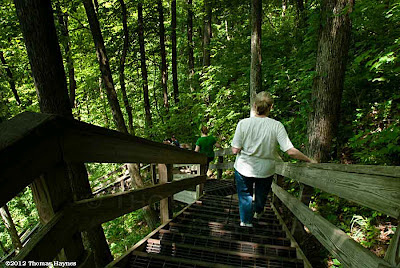 Steps were constructed fairly recently from the falls top to the level shown in first photograph, 426 steps down and slightly over 200 more to the fall base.
Warming up is recommended prior to going up.
The hike into Amicalola Falls at the level shown is more of a short walk than a hike. Approximately 0.3 mile long, the trail gently descends and is paved with recycled rubber from tires.  This very gentle pathway makes the falls accessible to most everyone. Still, the woods surrounding the walkway is the same woods found on the moderate and strenuous trails and will allow you to see many of the same features if you look around at the large and small provisions of nature.  We had seen the falls and did enjoy that. We went up the steps to the top and back down again. On the walk out other visitors stepped quickly passed us as we looked for surprises and found a few. 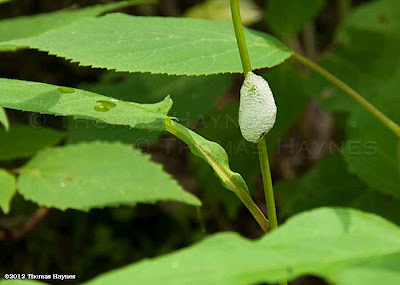 Can you identify this egg case? 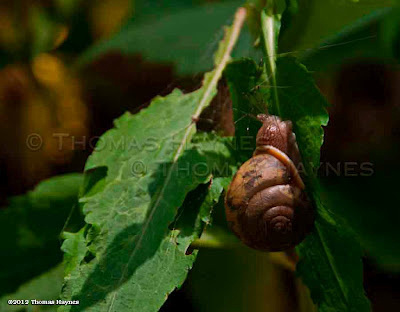 The most damp part of the trail edge revealed a lot of snails almost hidden in the foliage. A granddaddy long legs walked across
this snail and stopped to "take a drink" from the wet back of the snail's head.  At least, it appeared to take a drink... 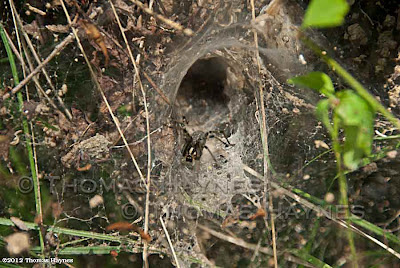 Its web under an outcrop at the woods edge, this spider has a tunnel web.  It would sit in the doorway and wait for insects to be caught in the web away from the tunnel.
The Appalachian Approach Trail begins at the park visitor center then to the base of the falls.  At the onset and along this trail we saw the snakes.  Following the trail on and upward past the falls is the trail to Springer Mountain and the official southern end of the Appalachian Trail.  Those hiking the AT would generally begin at the trail access above the waterfall.  We took the trail toward the base. 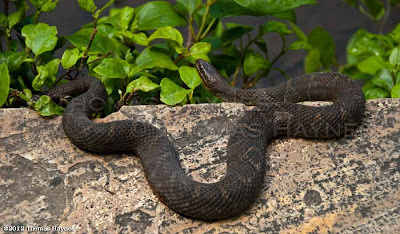 The trail passed a developed pond where visitors fished for trout.
Sunning on the pond edge was this stout water snake. Keep in mind, killing snakes or capturing for pets is illegal in most states. Georgia imposes a $1000 fine for killing snakes. 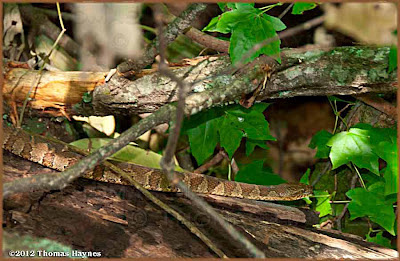 Copperhead! It is amazing how seeing a snake in the wild and only getting a partial view will lead to a mistaken identification.  This was on the trail edge in downed trees and bramble  We could not see its head clearly at the time. The back pattern should have been enough to tell us it was not a copperhead.
Copperhead and timber rattler are the two venomous snakes in northern Georgia. This snake was neither. The pattern on the back is that of a water snake. The darker markings are the opposite of the copperhead: Copperhead  darker markings become narrow along the back and not wide as in this snake. It took seeing this photo to know what we had really seen. The head appeared clearly only for a split second and we did not see it neatly while on the trail.  Still, the practice is not to approach the snake or ever reach for it, even if you think you know what it is. Thinking back, we were fairly close to water at the time.  Who knows, I believe it to be a water snake but may yet be wrong. I do know it is not a copperhead.
All in all, Amicalola State Park in northern Georgia makes for a fun and  pleasing long weekend. This is not a large park with trail after trail after trail. It does offer trails enough for the weekender and is quite pretty and resting to the eyes and spirit. 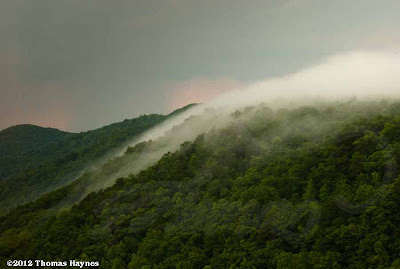 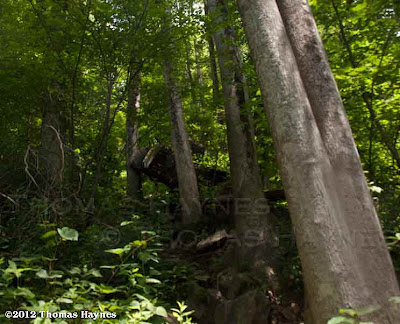 Those familiar with old time history of moonshine know the mountains of North Carolina, Kentucky, Tennessee and Georgia were home to a few inventive folks who made white lightning.  This illegal "whisky" was almost pure alcohol.  How did it get to town? Sometimes the transportation was tanker trucks or cars, ordinary vehicles with hidden tanks or storage areas to carry the moonshine.
Most of us have heard of moonshiners in souped up cars running from the law. As I was told by the locals, this truck we spied in the woods was a tanker truck.  To be where it was meant a long drop..a crunching roll down several hundred feet of very steep mountain side.  The photos do not do justice to the steep grade of the mountain.  The road runs on up to above the falls but at this point we were on a trail below the falls.  What happened really? Was anyone in the truck when it tumbled down the mountain? No one knew the full story but all said it was a moonshiner's tanker. 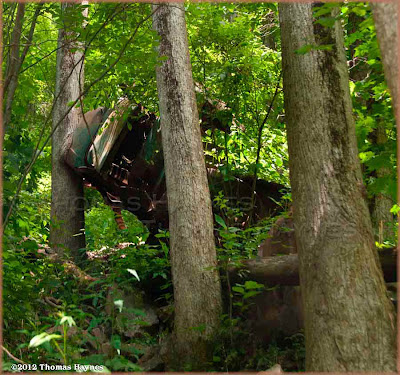 Notice in this closer view how the poplar tree has grown
around the front of the truck.  That is the hood against the tree
and the smashed remains of the roof bent down and onto the hood.
The end of this post

Chris(non-registered)
How do I find the truck? No one will sat exactly....
Justin feagans(non-registered)
Love it took some great photos this past weekend!
the georgia squirrel(non-registered)
I was up there today and I've been looking at that truck ever since I was a small kid.the past few years I've been asking about the truck ever I'd heard the moon shine thing a few times and I've heard that there guys in the truck were drunk and I herd from .sn old man that used to work there that they were running from some body (competitor or the law we may never know) but I was running up the stairs and had a thought why not go see the truck so I climbed up to see it and from my knowledge I think it's an 50's chevy and I did see evedance of modification its a really cool that the park left it there(I do not recmend that any one climb up to it) and a great reminder to never drive drunk
No comments posted.
Loading...