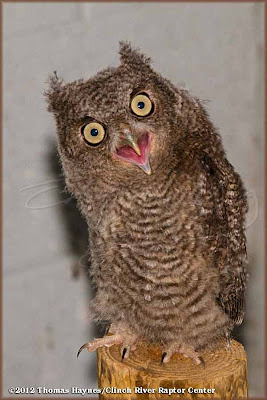 Screech Owls are the quite small owls with a baneful screech, a sound that has frightened many visitors to unfamiliar night woods. To imagine what creature was calling out would not bring thoughts of the small Eastern Screech Owl.  Once heard and recognized, there is no fear in the sound but rather an appreciation of nature around you. Follow the link to  hear sounds of the screech owl. 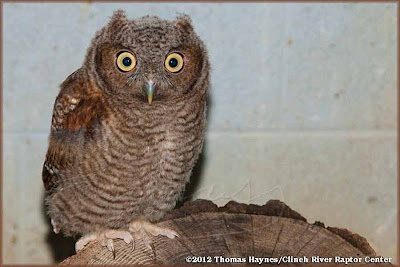 There is a new group of fledgling screeches at the Clinch River Raptor Center and also a group of young Kestrel falcons.  The owls came from different places and vary slightly in growth and development of feathers. In these photos, you may see a reddish coloration.  Otherwise, the color is mostly gray.  In the wild the owls are seen in both red and gray versions. Full color will develop as the owls mature. 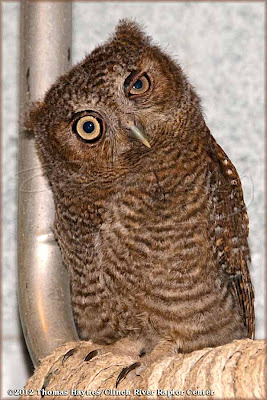 Notice the talons: Owls have four toes, with three front toes and one in the back just as do hawks. However, when owls perch they put two toes forward and move one to the back.
---------------------
Is this owl saying you almost deserve a wink?

Fledgling birds are those old enough to leave the nest but still developing their feathers. They fly but not easily or with expertise and generally would be under the watchful eye of parents for a while longer. They are not really grown enough to be out on their own.  The birds shown will be cared for and assisted in learning to hunt for food.  All of this must be done without allowing the birds to become trusting of humans.  They must remain owls in all aspects and know they are wild and not closely associated with people.  If all goes well, when ready and able the screech owls will be released into the wild.

I was with these owls about a minute, not longer. With five youngsters in the area they each had found a place to perch and did not try to fly with me present. They made soft little owl sounds and no screeches.

Thomas Haynes is a photographer working out of Clinton, Tennessee, a city just north of Knoxville. His photography is often of a fine arts direction but as in this post, his love of nature takes him again to the Clinch River Raptor Center, a rehabilitation and educational not-for-profit organization.. Visit Thomas and see more of his photography at  Facebook